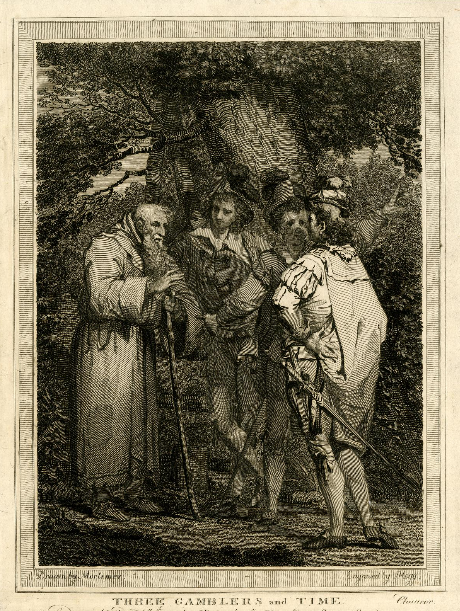 It’s been extremely difficult to gain a sense of perspective in the last two months and it’s my hope in the following essay to offer some meaningful comment and help you plan your economic future.  Some of it is upsetting, some of it hopeful; there are no easy answers.

The events of the past few months have been dramatic, tragic, and massively disruptive.

We are in the midst of a natural biological disaster with some man-made consequences.  This is a most intense and public example of decision making in real time.  Modern decisions are usually made with reams of data and sophisticated modelling but what about when there’s no data, misleading data, false data, or no previous precedent?  How can battlefield-type decisions be made when the enemy is invisible?

Time for some real human ingenuity.

This drama is unfolding in three acts.  The Prelude, Crisis, and Healing.  You’ve lived through the first two acts so I’ll give a general timeline and you can fill in the dramatic flourishes on your own. The issue at hand is regarding the pace of healing.

March 7th.  Saudi Arabia responds to Russia’s bad attitude in Vienna by announcing their intention to flood the crude oil market and completely unhinge OPEC+.  Monday the US crude oil benchmark (WTI) loses 25% of its value in a single day and global stock markets plummet.  The SP500 ends down 7.5% at 2746.

March 15th:  The US quarantine begins.  In a costume change for the ages, the Federal Reserve takes on super-hero qualities and unleash a monsoon, flooding debt markets with liquidity.  They reduce the discount rate to zero and announce an alphabet soup of programs to effectively support every bond market in America (even junk bond ETF’s….) as well as opening facilities with foreign central banks to provide dollar financing globally.  The S&P closes at 2386, 64 days after the first reported viral death in China and 27% below that first day’s closing price.

Note: In ten years’ time the actions of the Fed will be viewed in financial circles like a Henrik Lundqvist kick save in Game 7 of the Stanley Cup with three seconds on the clock to seal a New York Rangers victory; for non-hockey folks that’s the stuff of legends.  The Fed’s actions were split-second in central bank terms, decisive, comprehensive, and without which the financial markets would now be truly staring into the abyss.

But in the words of Diane Swonk, Chief Economist at Grant Thornton, the Federal Reserve is a “Lender not a Spender”*.

March 23rd.  As Robin to the Fed’s Batman, the US Government leaps into action and debates the CARES act.  At many points it may have appeared that Robin has his shoelaces tied together as Congress stumbles towards an agreement.  On March 22nd the failure of a procedural vote causes markets to hit ‘limit down’ overnight.  Making sausage is not pretty.  The S&P has its lowest close at 2237.

There is a saying, “Markets stop panicking when politicians start to panic”.**  Congress gets the message of the market and negotiates.

Since the passage of CARES, the S&P 500 has moved 39% higher from its low close of 2237 on March 23rd.  The crisis of financial implosion was averted.   Now begins the third act of economic healing.  The damage as you will see is extensive.  The curatives put in place are extensive as well.  The question is, ‘is it enough’?

This act is just starting, and the decisions made in the next few months will determine the economic path for the next decade or more.   Seriously.

So, where are we now?

Simply put, we are in a Federally mandated economic depression (or close to a depression) instituted in response to a public health emergency.   Ash Alankar of Janus Henderson described the current state of affairs as ‘a race between viral containment and bankruptcy’.***  Dramatic, but not inaccurate.

Liquidity is a short-term issue, solvency is long-term question.  The Federal Reserve takes the lead on liquidity support, the Legislature and Executive branches take the lead on solvency support.  Have they performed on their mandates?

Financial liquidity starts with properly functioning markets; this is where companies and governments can issue debt and help fund normal operations.

What is the state of financial markets?

The Federal Reserve Bank of St Louis Stress Index is a good single-picture summary on health of markets; it measures different yield spreads and interest rates and combines them in index.  Our current century is shown below:

The first grey area above is 2001.  The second grey area is the 2008 financial crisis.  Notice that the 2008 crisis evolved over a course of 18 months.  Thus far this drama has happened over the course of 8 weeks.

The financial stress graph is magnified below to show the past 12 months.  Notice how quickly the actions of the Federal Reserve took hold and brought some level of order back to the market.

So financial markets are operating and there is massive Fed supplied liquidity.  What about the condition of the general economy?

There are a slew of graphs and economic measures showing the extent of the economic downturn, I’ll just show one.

Below is a graph of the monthly change in United States Non-Farm Payrolls since 1939 (yes, eighty-one years of data).  The current economy has stopped.  Over 20 million people who had a job in March are not working.

What is being done to counter this unreal looking graph?

Is there a parallel to compare this economic full stop and through that glean some path forward?

Claudia Sahm is an expert in recession economics.  She is a Director of Macroeconomic Policy at the Washington Center for Equitable Growth and was a Senior Economist for the Federal Reserve Board of Governors.  Mrs. Sahm likens the coronavirus disruption to a hurricane, below she shows the change in retail sales in regions affected by hurricanes*****: 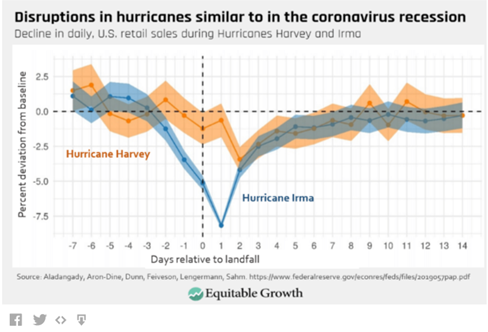 And what happens after a hurricane?  In rolls massive government support and a complete rebuilding of communities.  That is exactly what is happening globally.  Economic activity is being replaced by government support globally.   And this is the way liquidity is entering the whole economic system. 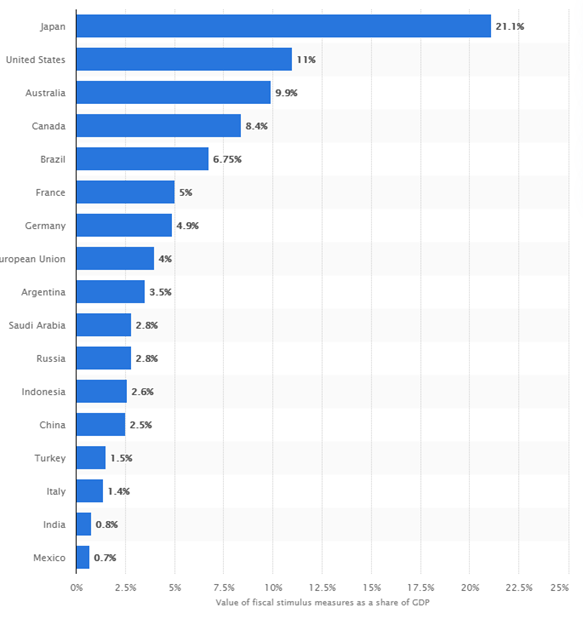 The CARES act and related bills contain provisions to distribute 11% of yearly US economic output (Gross Domestic Product) in support of the economy and its citizens.  There is more legislation currently being negotiated that may increase that number to 15% of GDP or more.  Japan is firing out 21% of its’ GDP and Europe collectively is spending 15.3%.   These numbers are surreal.

For some perspective, consider the Marshall Plan.   In 1948 the US government provided approximately $17 billion to aid European allies to reconstruct their war-torn countries.  That year US GDP was $275 billion.  The Marshall Plan was 6% of US Gross Domestic Product.  The Corona support bills are currently twice that.

And remember that by 1952, only four years later after the Marshall plan began, participating Euro-countries had GDP’s higher than when they entered the war.  The Marshall Plan gave the opportunity for Europe to embark on a period of massive growth.  It’s not unreasonable to consider this a global Marshall Plan.

I cannot predict if the CARES act will do likewise but the potential is there.  In contrast to WWII or Hurricane Irma, our productive capacity is intact and ready to go once the all clear is given.

Remember, contrary to what the press likes to say, these are meant to be support programs, not stimulus programs but there is a delta here that is crucial.  The argument can be made that if the upcoming GDP numbers show a downturn of say 10% and the US government provides 15% of GDP in support, that is highly stimulative.   In fact the 5% differential would be twice the growth rate of the pre-virus economy.  Did anyone say inflation?  This is a possibility, but future GDP is opaque and so is future government spending.

The single greatest variable is currently unknowable, when is it safe to start living life again and will this virus return?

And this is also the answer to the second issue, one of solvency; I wish I had an answer regarding future solvency but no one really knows.  This is the battle being fought in financial markets currently.

But if humans are given the opportunity to innovate, cooperate, and participate we may look back on the year 2020 as revolutionary.