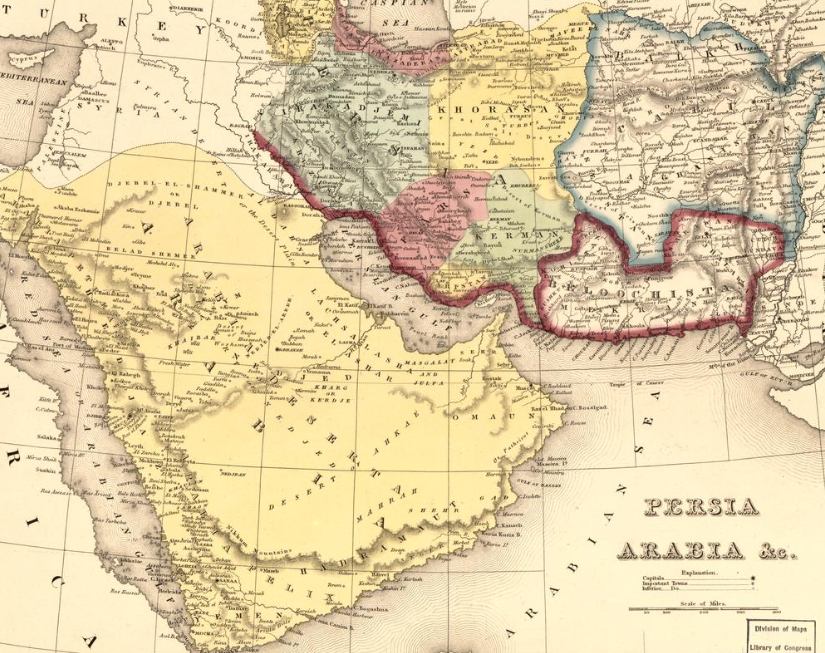 IRAN: What are the risks to your portfolio?

Global tensions have heightened with the actions of last week, the question I hear from clients is ‘what does that mean for my portfolio’?

The short answer: currently not much.

But what are possible implications going forward?

Some background: Iran is a country with a rich history and culture currently experiencing some serious economic problems.   The government, born of a theocratic revolution, is highly repressive and has had a history of seeking to exert power in the region.   It is seen as a threat to many other Arab nations in the region.

Iran shares a 600-mile border with Iraq with whom it has had a fractious relationship over generations.  Realize that the current generation in power were probably soldiers during the Iran-Iraq wars, one of the most disturbing conflicts of the 20th century, and there is a deep distrust that runs below any ‘cooperation’ they may announce publicly.  The governments of both are now predominantly Shiite led but Iraq will want to counter any further projection of Iranian influence upon its sovereignty.

The most coveted asset for either country is their oil reserves.  Firstly, where are they and how do they figure in any geopolitical calculus going forward?

Below is a map (courtesy of Google) of Iran’s main oil fields and refineries: 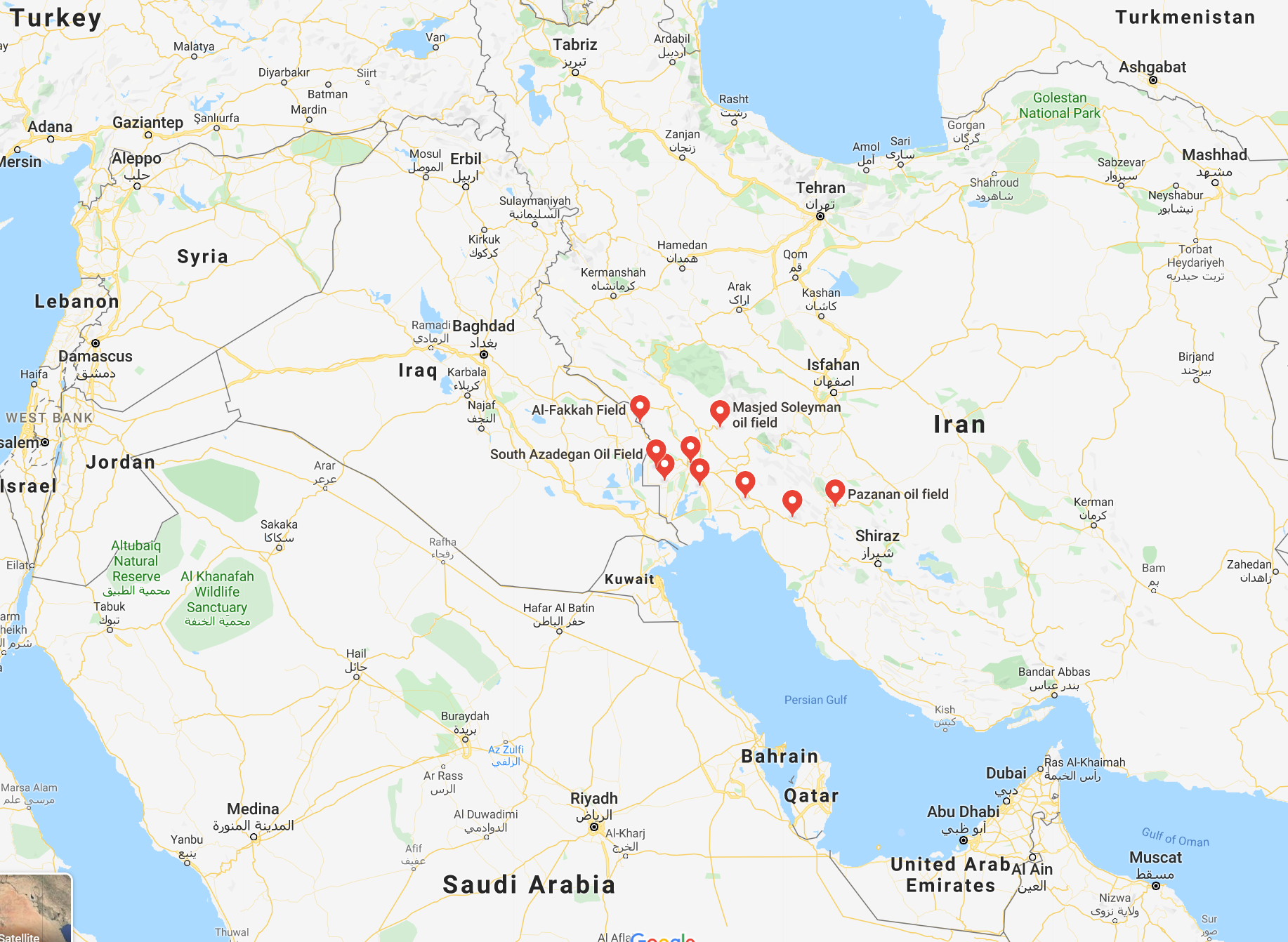 They scatter south-eastward from the Iraq border towards Shiraz.  Here’s Iraq’s oil assets: 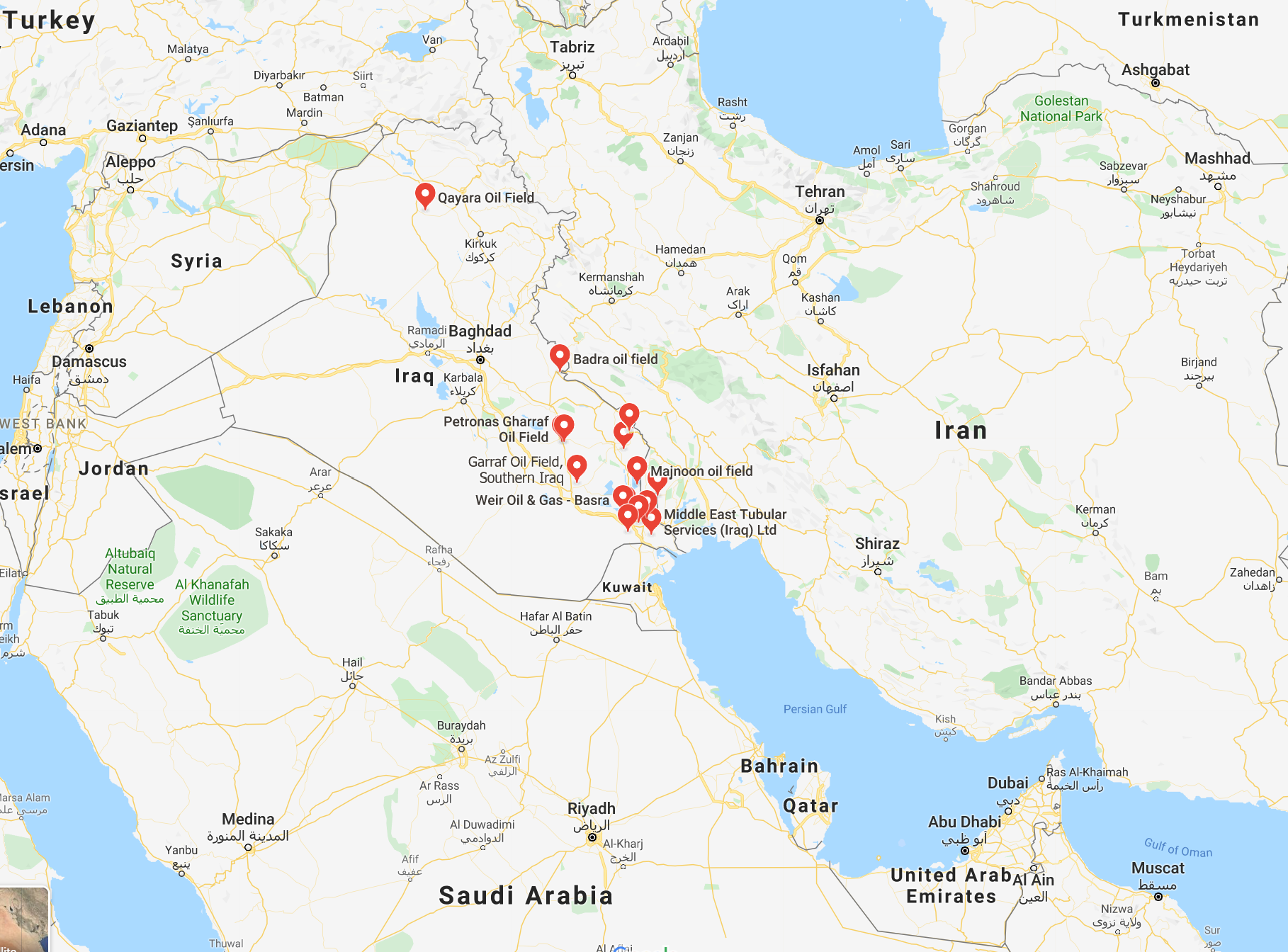 Iraq’s most important national assets are bunched up against the Iranian border and have only the smallest of access points to the Persian Gulf (see why Saddam Hussein wanted control of Kuwait?).

My kids are in high school and I’ve had a few questions like ‘is this the start of World War 3?

My answer: It’s highly, highly unlikely that the US will be going to war directly with Iran.

Why?  One predominant reason is because Iran doesn’t have the money.  Their designation as a state sponsor of terrorism has led to $90 billion frozen in overseas accounts.  Nor would their citizens be interested in supporting the current regime if it goes to war given their experience 40 years ago.  For background, check out the history of the Iran-Iraq War.*

Iran’s only real asset in terms of global trade is crude oil.  Exports since the US re-institution of sanctions have plummeted, see below:

There are claims Iran is exporting much more than the reported 450,000 barrels per day** but even if it were exporting double of what is reported it would still be half of reported exports in 2016-17 (approximately 2MM bpd).

Secondly, Iran would face an existential threat if it were to engage in anything at all close to a war.

The regime has spent decades building a ‘Shia crescent’ through Northern Iraq to Syria and looks to exert power over the entire region.   Recently it has exerted more and more influence on its neighbors politically and militarily, taking advantage of Iraq’s current weakness.

Iran certainly covets the crude assets immediately over the border but any real occupation of Iraq would set in motion a path with a binary outcome.  Either the global community looks the other way, allows the transgression, and Iran solidifies its power in the region or it gravely miscalculates the international reaction and the regime potentially sets in motion its own demise.  Even for a radical theocratic state, that is a huge gamble.

The US administration has already taken steps to “secure the oil”*** in Northern Syria and that has become a stated mission, the architect of Iran’s aggression in the region, General Soleimani, is no longer guiding this policy, and the rest of the Middle East has limited appetite for further turmoil (notice the muted reactions throughout the region to the Generals demise).  This doesn’t appear to be an environment supportive of further conflict.

Conclusion:  Although there is a risk of some form of conflict, it is highly unlikely anything approaching the level of a war is imminent.  Any conflict may create some volatility in global markets but would probably not elicit any lasting economic shock.

China was the largest importer of Iranian crude before sanctions and continues to ignore US ban.**  Would they be interested in supporting Iran against the US?  Highly, highly doubtful that China would want to generate a global conflict.  Russia, another global player, is a player in Middle East geopolitics and has recently offered assistance to Iraq but it is currently up to its eyeballs dealing with Syria and ISIS and it is difficult to see how it would have an interest in supporting a protracted conflict.

Most of Iran’s neighbors are interested in containing the country not in aiding it.  Iran has historically supported militias and groups that have a certain destabilizing effect upon their regions and countries and these very proxy actors face the fact that their sponsor has been severely weakened by the events of last week.   It is more likely that Iran’s neighbors will begin to push back against their goals of regional power.

Conclusion:  A proxy war that has the potential to affect global financial markets in a meaningful way is doubtful.

Iranian proxy forces in Baghdad have been implicated in the storming of the US embassy in Baghdad on January 31, 2019.  In hindsight this will be viewed as a massive miscalculation on the part of the Iranian regime.  Recall that in November of 1979 Iranians stormed the US Embassy in Teheran and held Americans hostage for 444 days.  It is notable that the hostages were released on the day that Ronald Reagan was installed as the 40th President of the United States.

Realize that Iranian militia have just attacked a US Embassy (which is by definition sovereign soil) 308 days before another US election.  Major General Soleimani, through his proxies, exhibited extreme hubris in this action and it can be argued that this could very well have been part of a grand plan to upset the political environment in the US.  History Rhymes…

There may be attacks on US persons or political installations around the Middle East in reprisal for the US action against Soleimani but it is now a known risk and the element of surprise is lost for the potential assailants.

Conclusion:  It is hard to see how any further Iranian attacks on persons will succeed in the coming months, but I’ve been wrong before.  Any events they may cause a certain level of volatility but overall it’s hard to see any major financial market risk here as well.

There are two separate issues to address here, tangible crude oil assets and intangible cyber-assets.  There are risks to the financial markets in both.

Reference the map below (courtesy of Google).   Saudi oil refineries are next to the blue arrows, the Straits of Hormuz is under the red arrow: 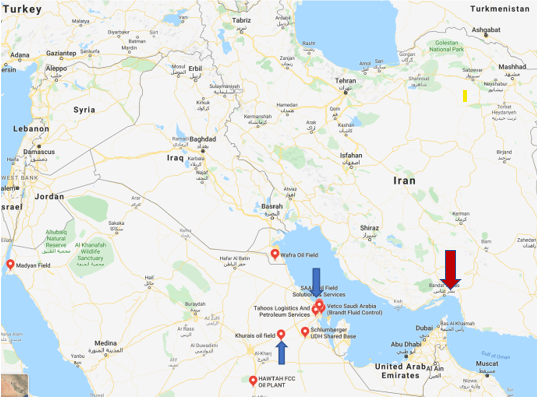 The hegemon in the world of oil assets is Saudi Arabia.   On 14 September 2019, drones were used to attack the state-owned Saudi Aramco oil processing facilities at Abqaiq and Khurais in eastern Saudi Arabia (Blue arrows, above).

Houthi rebels in Yemen claimed responsibility but Iran has been implicated in the attacks:

The attacks impaired production for over 2 months, a meaningful span of time for the world’s largest producer.  An extended oil disruption could be a shock to the global economy, if that happens are there other suppliers to fill in the gaps on supply?

The graphs below show global crude supply by 2 metrics, API (or the weight of the oil) and Sulfur content (lower sulfur is easier to refine).  “Arab” is the market term for Saudi Arabian crude, which is offered in the marketplace in three forms, Arab Light, Medium, and Heavy.  Guess who’s the closest alternative to Saudi Light and Medium crude with any meaningful volume?  You guessed it… Iran.

Remember the map of Iraqi refineries?  They could provide supply as well but in the escalation of any conflict it is doubtful that Iran would allow them to remain productive.  Dubai, Egypt, and Kuwait can satisfy certain needs but ironically Iran has the highest unused capacity. 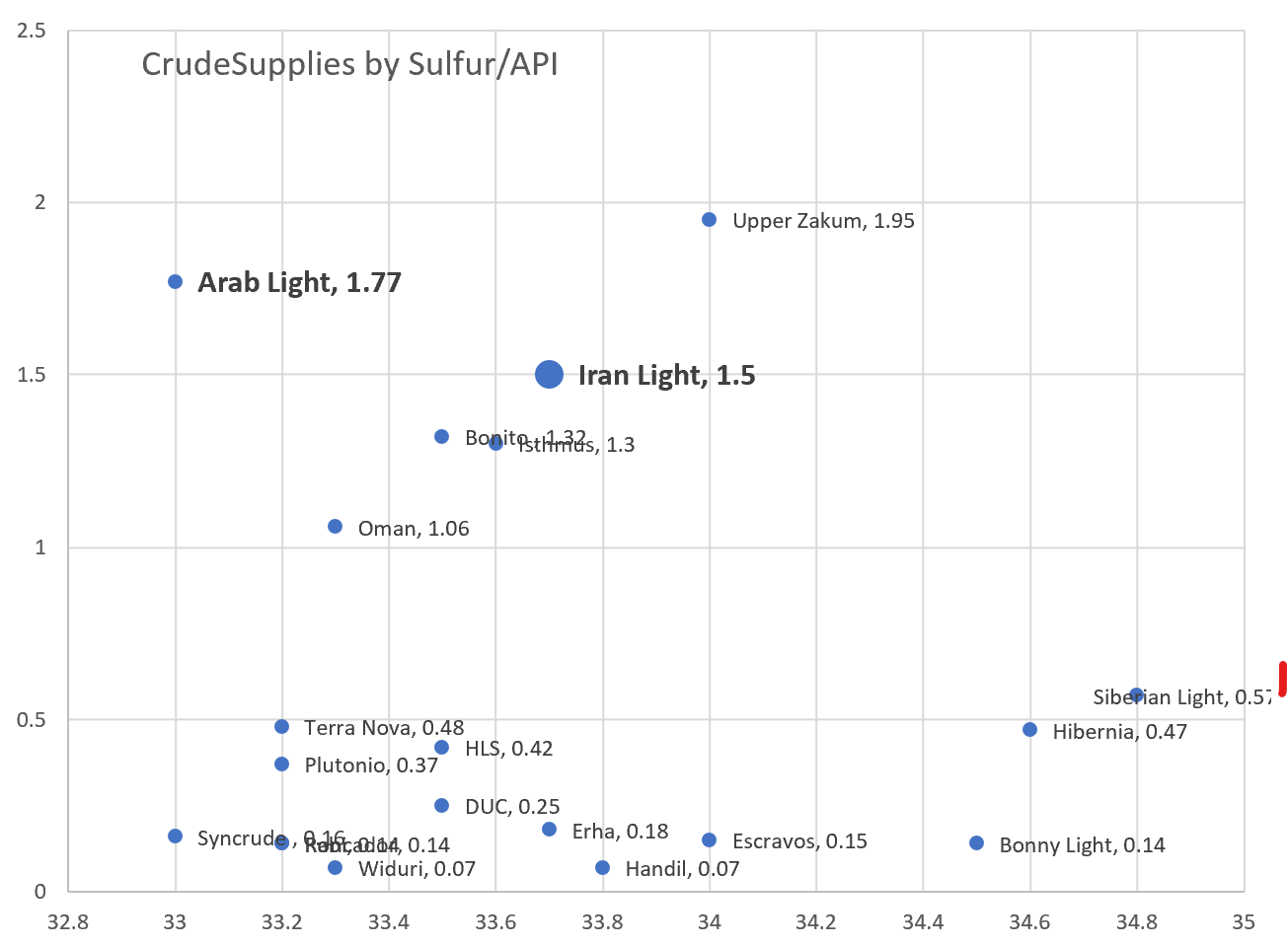 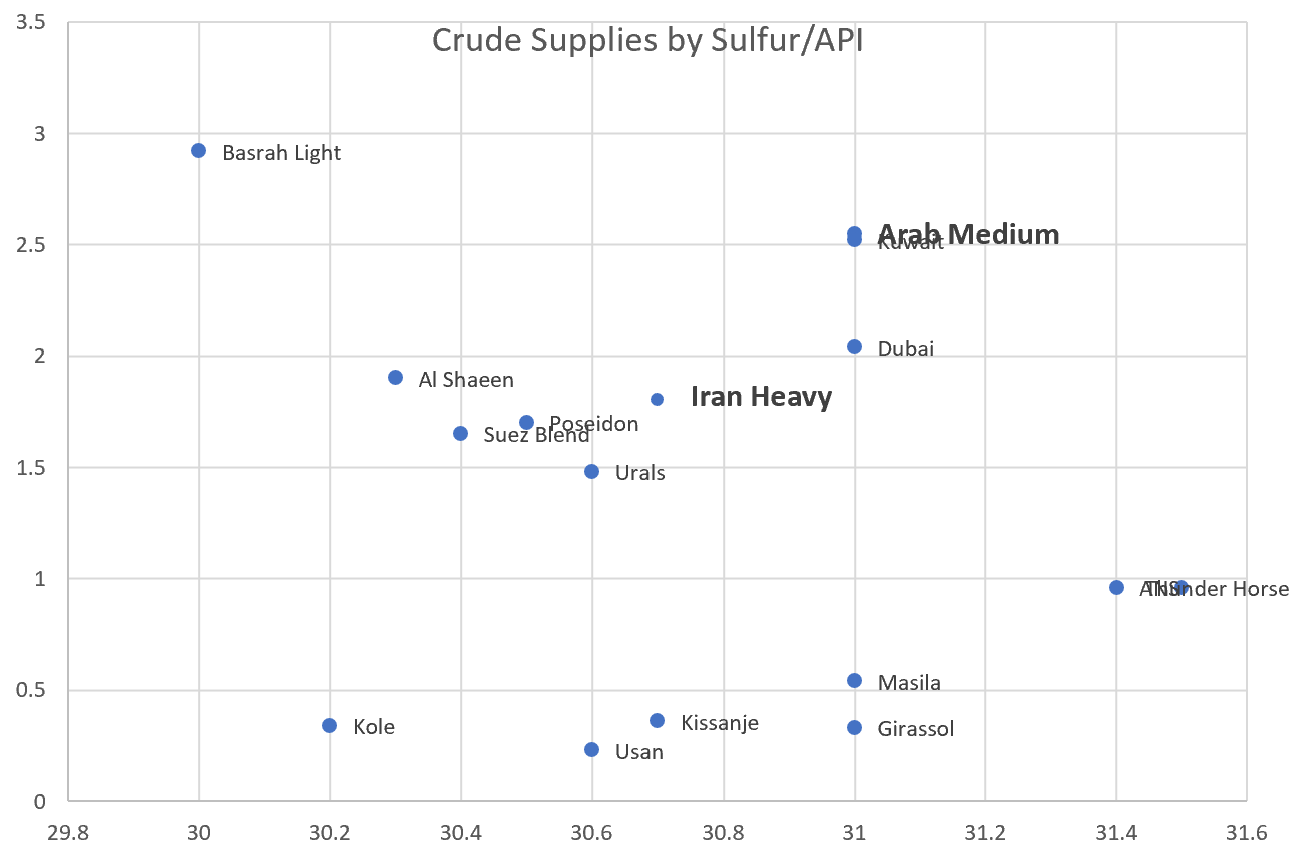 Any concerted attack on Saudi crude oil capacity is a risk regarding an escalation of this conflict.  Whether Iran has the capability in place (through proxies or otherwise) to launch an attack is unknown.

What about the Straits of Hormuz (the red arrow on the map above)?  This is arguably the most important stretch of water on the planet and Iran can and has previously impeded the flow of crude oil transport through this waterway.

The issue here for Iran is any action in the Straits is an attack on the global economic system and they may be making more enemies than friends.  This also risks the curtailing of any crude shipments by Iran themselves thereby depriving themselves of their main source of revenue.  Any move to block the Straits would again place the regime in a truly no-win situation.

Lastly, the risk of cyber-attacks on US assets has been highlighted as a real risk going forward. They have a disruptive capability and have exhibited proficiency in cyber-theft and disruption.  The Department of Homeland Security has issued the following document describing the threat:

This is an unknown regarding financial market risk.   This is also the area in which any success by the regime could have a weakest response by the US or other targeted entities.  A hacked website will not lead to the bombing of Iranian tangible assets.

Conclusion: Iran does have options regarding the attacking of US or other international assets.  The disruption of the flow of crude oil through the Middle East raises market risk and portfolio risk can be managed, but the negative consequences for the Iranian regime are high as well.  Attacks on cyber-assets appear to be the most attractive option for Iran to undertake in terms of their risk reward.

What will do I do to manage this risk for my clients?

It is my hope that this clarifies some issues for you and the risks to your portfolios going forward.

This is the type of top-down market risk analysis I do daily for my client’s portfolios.

Note: For an excellent perspective on the current state-of-play in the Middle East, I’d direct you to a blog authored by Avi Melamed: