With all the talk of trade and tariffs it’s worth it to take a step back and think ‘how much does this trade relationship really matter’?  Sure China’s big with a big population and big markets to sell to but China is still a ‘developing country’ with real economic challenges ahead of itself, why should we care?

Scale.  Massive scale.  Just imagine if China became as productive as the US.

Think about this; if every Chinese citizen were currently able to produce the same amount per person as we do in the US, China would now produce as much as the rest of the planet…combined.  Bigger than big.

If China’s 1.4 Billion people were able to produce goods and services at the level (per person) of the United States, their Gross Domestic Product would be 89.4 Trillion dollars, more than the entire planet combined.  See below for all the numbers and calculations *

China is an inconceivably large potential market and could dominate all aspects of international trade…and the winners for the next century may be the vendors supplying that market.

Is it possible for the Chinese to reach that level of production?  Probably not.  The challenges for available resources, stresses on productivity, pollution, refuse, physical space, demographics, an undeveloped personal credit market, and a host of other forces can create serious headwinds and limitations going forward.

But the Chinese are taking aggressive steps to develop its own economic sphere of influence, witness the ‘Made in China 2025’ plan and the ‘Belt and Road’ initiative (see below for excellent articles on these potentially game-changing programs).  These programs can broadly expand Chinese influence in other parts of the world without the need of engaging with more developed nations and without challenging more established trading blocs.  If it works, China can ‘go it alone’ within its own sphere of influence.

Since 2008 Chinese per capita GDP has tripled.  Take a look at the graph below (source: World Bank national accounts data, and OECD National Accounts data files.) 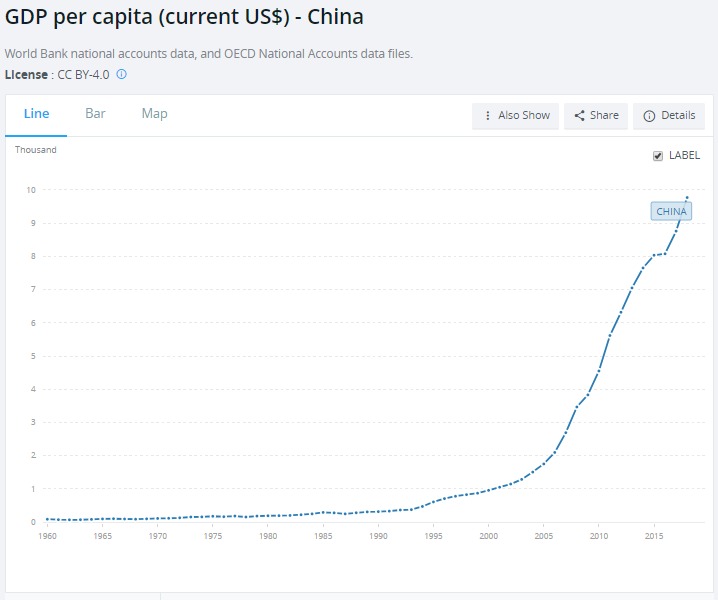 China has benefited over the last 30 years from an open trade structure where they were able to leverage off their massive labor advantages.  This is changing as global trade partners (both nations and corporations) take stock of the implications of current Chinese trade practices.

Questions being asked surrounding current risks of operating in China:

This could prove the single largest global economic question for the next 20 years: Is it worth operating in China if a foreign firm’s competitive advantage is taken from them?

One can argue whether tariffs are the best way to confront this issue but the issue must be addressed, preferably in a coordinated way between global trading partners.

There are two basic options for China, cooperation with larger trading partners or cooptation of lesser partners.  One way presents a great probability of continued economic expansion, the other creates an economic headwind.

How does this affect your portfolio?  In the long-run emerging markets could benefit either way as production shifts to a lower cost, lower risk provider. Unfortunately natural resource/ commodity firms will boom and bust according to Chinese cycles of production. The US market will be affected but remember, pre-tariffs China only bought $505 Billion of US goods*** (only 2.4% of US GDP) so, given low interest rates and moderately benign business conditions US-centric businesses should be shielded from this conflict.

As this narrative unfolds be prepared for some periods of higher volatility.  If you’re an optimist, it’s a buying opportunity.  If not, keep in mind that China’s per capita GDP is still just 15% of the US level; going forward China may have no choice but to cooperate with trading partners around the world in order to continue their unprecedented economic expansion.

This is being provided for informational purposes only and is not intended as a recommendation to buy or sell any specific security. Past performance is no guarantee of future results and all investing involves risk.